Last night my guild invited me to do The Manufactory, one of the new Tokyo dungeons. Unlike the other dungeons I’ve done, this one makes use of the AEGIS system and requires that you have controllers and shields upgraded. I’m nowhere near where I ought to be but I was generously carried along anyway so that I could see the dungeon and learn the fights. And since I did not have my AEGIS shields before we started, they even ran me through the quest required to obtain them first. All in all it was a lot of fun and makes me wish my AEGIS equipment was in better shape as I think the added complexity brought about by the controllers and shields makes for an interesting dungeon.

The fights in The Manufactory were on par with many raid level mechanics I’ve experienced in World of Warcraft and the added AEGIS system meant you had to pay attention to the enemy shields as well as everything else. Player shields were less interesting though; in most cases I was told which one to switch to and then I could forget about it after that until the next time it needed to change. There were a couple of interesting uses where team members had to wear different colored shields but otherwise I don’t think they add as much to the experience as the controllers and enemy shields do.

I’m not going to go into the specifics of each fight because frankly I would have to run it again to better understand some of them myself but they were all unique and they all required a high degree of teamwork and a working knowledge of the fights. I can’t imagine what it must have been like trying to learn these bosses for the first time, but then I could say that about almost all of the dungeon bosses in The Secret World. One of the fights, referred to as a game of “rock, paper, scissors” by my Cabalmates had me so confused I just ran around the whole time and tried not to get in the way. But the rest of the bosses I think I could do again without too much additional explanation and I hope that I’ll be able to soon.

I didn’t get any useful loot other than a 2.0 upgrade kit for one of my controllers (which I won’t be able to use for some time, but is still handy to have) but with the double AP event that started I was able to advance my skill wheel respectably for one evening’s work. I didn’t go for any rewards though, just to do something new with my Cabal. And as an added bonus, I was able to get on Team Speak with them for the first time and start to associate real life voices with in game characters.

Overall my progress is coming along quite well with the exceptation of the AEGIS equipment; my skill wheel is at 62%, I have two glyphs at 10.4 and third at 10.2, and I can now say that I’ve seen the inside of The Manufactory and completed it. Doing so has me eager to jump back into Tokyo so I think I’ll take a break from the Black Bullion farming I’ve been doing in Shambala for a little while and pick back up where I left off in Kaidan, at the Fear Nothing facility.

I thought about writing a post a while back on whether or not I was an MMO role player although now I can’t remember what initiated the idea originally. Still, it came up again in my musings this week, so here we go! I’ve only attempted to RP in the traditional sense once, in WildStar. It started off okay; I went to an RP housing plot and “sat” at a bar table observing and listening to other conversations while the owner and I engaged in some light RP. She was kind enough to help me get started once I confessed OOC that I had never gone to an RP event before and I wanted to observe. However it ended with me going outside for what I thought was going to be a card game but turned into something vulgar so I kindly dismissed myself (in character, of course) and RP walked my butt off the plot.

I was enamored with the Radiant Legion in WildStar, which is why I tried role playing with this character. It didn’t pan out.

So I don’t join other people regular in spontaneous or planned storytelling of that nature, nor do I come up with elaborate back stories about my characters covering every detail of their present and past experiences, but I do think about who my characters are generally speaking and what their reactions might be in the situations they find themselves in. It’s never all that different from how I would actually respond but it is a type of basic role play; enough to keep the “RPG” in my “MMORPG” experience anyway. I don’t think I’ll ever participate in RP activities more involved than that, though I’m not opposed to it. Not entirely, anyway.

Still, there’s another aspect of playing an MMO in which I would describe myself as a role player, albeit moderately so, and that is with character creation. How my characters look matters to me, and especially with alts I want them to be diverse; to actually have distinct character. And once I’ve made a decision on how a character looks I rarely change things later on. When I do I often change them right back. It may only be a different hair style or color but it’s often jarring enough that I no longer feel like I’m playing the same character.

The first iteration of Sevenfalls had no freckles, darker make up, and a mouth that was too small. These things I changed early on because I didn’t like how they looked in game.

This happened most recently in The Secret World, when after 200+ hours of time played I changed the hair and lipstick color of Sevenfalls, my main. In TSW changing your character’s appearance— even superficial changes like hairstyle, color, and make up—is quite expensive so it’s not something you do willy-nilly on a regular basis. Appearance is meant to be semi-permanent in this game which is why I kept my character the same for so long (which by the way is silly, considering it’s a modern day setting and changing hair color, style, and makeup should be as common or infrequent as the player desires.) So when I tell you that I changed my character’s style, then changed it back to the original, then once again back to the new version, know that it was kind of a big deal and expensive.

What caused the back and forth were two conflicting emotions; on the one hand I wanted a change in my character’s style and that included hair and cosmetics while on the other hand she no longer felt like my character once the changes were complete. I tried to make it as realistic as possible. I kept her freckles even though they are tied to make up options (which is silly and restrictive, by the way), and I even kept her eyebrows the same as her original hair color so that it would be as if she dyed her hair but not her eyebrows to match. In other words, I was trying to approach it from an RP perspective but in the end she still felt foreign to me. 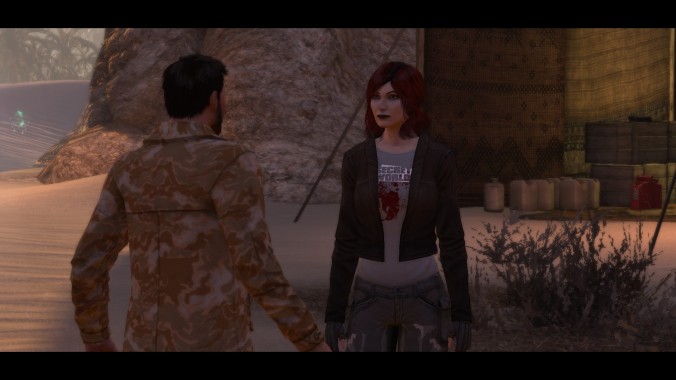 This is how I’ve come to know the character for some time now, down to the costuming. Just looking at this screenshot makes me want to change her back again!

Since I’ve paid three times now to make these appearance changes I’m leaving the new look for at least a week or two to try it out; maybe in time she’ll start to feel familiar again. But it’s interesting to me that despite the fact that the changes I made were those similar to what someone might do in real life I still felt disconnected from my character. Is that how I respond when a friend or family member cuts their hair or changes the color? I don’t think so but I guess most people don’t make these kinds of drastic changes on a regular basis so perhaps I don’t have enough examples to compare it to. However from what I do remember, when my wife cut her hair short I didn’t suddenly feel like I was married to a different woman.

Is it different because I’ve personally identified with the in game character, or perhaps because this digital avatar has no real personality, facial expressions, or mannerisms of her own for me to latch on to and so when the one thing that does define her changes, it affects how I relate to that character? I’m not going anywhere particularly deep with this line of thinking, but I am curious how others feel. Do you freely change the way your characters look and if so does it affect how you think of them? Does that make you a role player, or at least something similar? Or does it make little difference to you whether they keep a beard or are clean shaven; whether their hair is purple or brown? 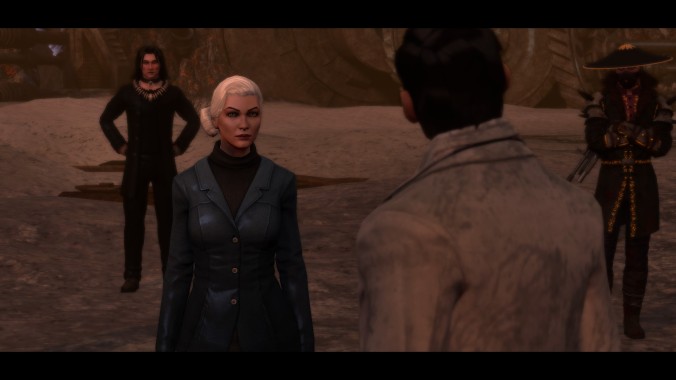 And here’s how she looks now, although I’ve tried a couple of different approaches with the outfit. Will I keep the change? I’m still not sure.

Ever have one of those days where you can never decide which game to play, and so you split your time between too many of them and accomplish very little? Or you’re looking at one of your characters and you’re thinking, “I’d like to make a change to her appearance,” and so you do, but you change it back and then decide, “no, I actually did kind of like it,” and change it all again?

Sevenfalls addresses her indecisiveness with shotguns and retail.

Or you’re trying to decide what to write about for Tuesday, March 22nd, 2016, and you have a few ideas in mind but you never write about any of them because you’re too busy bouncing between games or clothes shopping in London while chatting with Wolfy about it on Twitter? Ever have that kind of day?