Last year my MMO adventures included five games primarily: FFXIV, ESO, Trove, SWTOR, and WildStar. At the end of 2015 I saw a number of bloggers doing a “review” for the year however as I was not actively writing at the time I missed out. Instead, over the coming weeks I’d like to write a little on each of the five titles I focused on, noting what I liked, what I didn’t, and what factors ultimately led me elsewhere (if any). First up, it’s Final Fantasy XIV.

I started playing FFXIV off and on in the fall of 2014 but started the new year with an expectation of staying with the game long term. It had many of the features I was looking for in an MMO: I could progress all classes on one character, the combat while slow at first was the classic tab targeting I preferred (that’s changed since then), the atmosphere was beautiful, the community was friendly, and there was a steady cadence of content that included dungeons which were and are my favorite form of group content. 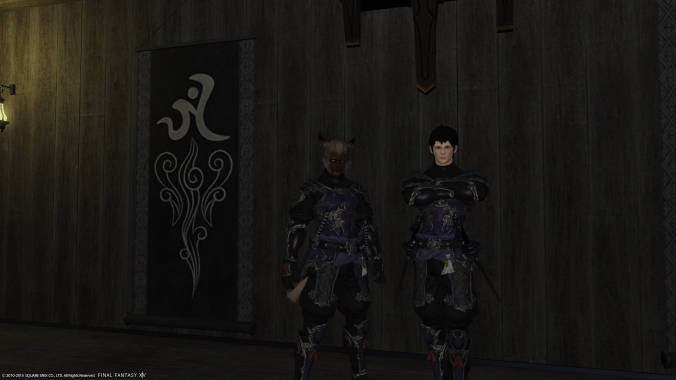 The day I earned my Ninja merit badge.

Previously I had hopped around between jobs but with the introduction of the Ninja I had finally settled on a main class and leveled my way up to 50. Even now the FFXIV Ninja easily ranks as one of my top three favorite classes to play. I loved the layered rotation, having to manage one set of abilities on the surface while weaving in another set in between. It was fast, complex, and very satisfying to execute well. Had my decision been based purely on class mechanics I would probably still be playing Final Fantasy, but eventually I moved on.

Unfortunately I don’t remember all the specifics of why I took a break from the title, but I do remember why I never picked it back up. When I stopped my subscription I was a little burnt out and figured I would take a little break before Heavensward. There was probably another game I was planning to play in the interim (maybe Trove?) but I don’t recall. I hadn’t finished the main story questline but assumed if I popped back in a few weeks before launch I could finish it up and be ready. Then I learned that the reality was far more complicated.

For whatever reason, Square Enix has designed the story aspects of FFXIV like a single player game, locking players out of the next tier of content before the previous one has been complete. Of course all MMOs do this to some extent but generally provide a way to “catch up” when a new expansion is launched. That’s what I was expecting, for Heavensward to be a kind of equalizer and help me catch up to those players who had been around for much longer. Once I realized that I had a solid month of content (and that was if I played nothing but FFXIV) including group dungeons and raids before I could even step foot in the new expansion I decided to move on.

While I wouldn’t mind seeing the conclusion of the story, I didn’t then and I don’t now want to work through the gear progression necessary to access the dungeons and raids that make up the rest of A Realm Reborn’s storyline. Heavensward sounds like it has been an enjoyable expansion but now with even more content between me and everyone else playing the game I don’t think I’ll ever return. There’s simply too much barricading my entry. To some extent, this “laziness” is just an illustration of how I felt about the game in general, it was good, but never great. It didn’t grab me like it has other people and with the way the game is designed I would have had to work harder than I was willing to be on par with the current patches.

Preparing to ride off into the sunset to see what other MMO worlds are just beyond the horizon.

I’d rate Final Fantasy XIV as one of the best MMOs on the market, and I love that so many people are enjoying the game. There seems to be a really healthy community coupled with an exemplary rate of content production; you can’t ask for much more than that. That said, it’s not for me. Between the required subscription and the gated content it’s one of the few games from last year to which I don’t think I’ll ever return.