Last week I purchased a couple more MMO soundtracks to add to my miniscule (but growing) collection. The first was Blade & Soul which was a no brainer, I’ve loved the music as I’ve been playing through the game. As the second I wanted to purchase one of the World of Warcraft albums but choosing where to start was at first difficult. However after listening through bits and pieces of each I knew right away I wanted to start with the Cataclysm soundtrack because for me, that will always be when WoW was home.

I started playing World of Warcraft during the Firelands patch of the Cataclysm expansion although at the time I didn’t even know what a patch was. It was months before I even reached Hyjal and took my first steps into the “new” expansion and by then Dragon Soul had already been released. The first character I leveled to 85 was a Blood Death Knight and shortly thereafter I tanked my first hard mode dungeon, my first LFR raid, my first normal difficulty raid, and ultimately found my home with the guild “Escape from Reality.” I know for many people this expansion represents a turning point for WoW and not for the better but even now I would happily play on a Cata era server.

While I really enjoyed the expansion’s leveling zones (especially Uldum!) the end game is what I remember enjoying the most. Some of its little stuff, like when I finally had blacksmithing and jewelcrafting maxed on my Death Knight so that I could have the extra gem slots and the special jewelcrafter gems. Or the fact that I could gain valor by either running one dungeon a day all week, or I could chain run them all at once in one night. Or having to actually use crowd control for some of the hard mode dungeons; I felt like a boss using “Bind Elemental” or whatever it was called on my Shaman. 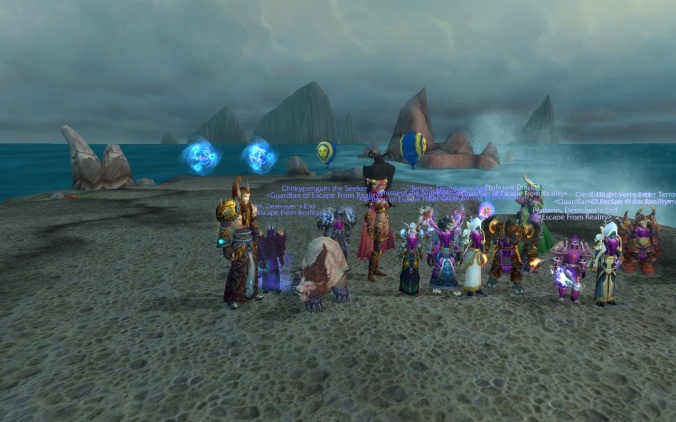 My guild, Escape From Reality after a Dragon Soul kill. I’m the Night Elf DK behind the Worgen bear’s butt.

Others are more significant, like the way the Blood Death Knight played as a class during Cataclysm compared to the two recent expansions. Playing a Blood DK well was very meaningful to me then because it was such a challenge. If you knew how to use all of your many cool downs and also how to game death strike and death runes to have big heals and blood shields you could survive nearly anything. I remember fighting Archbishop Benedictus once without a healer because he had been locked out of the fight before it began. I had to use everything in my toolkit to survive but we did it. Or another time during the Well of Eternity when everyone but me died on the first boss, Peroth’arn, and I managed to stay alive and kill him by myself. Those and many others were the moments that made me love tanking; moments that I don’t think were ever repeated during Mists or Warlords.

When I listen to “The Shattering” or “Curse of the Worgen” those are the things I remember and that’s why I chose the Cataclysm soundtrack over the others. It bothers me when other people put it down as one of the worst things to happen to WoW when for me it was one of the best but that doesn’t change my appreciation of it. While I don’t foresee it ever happening, were WoW ever to return to that “golden age” of Warcraft, it will be happy indeed for me and the ten other members of the Cataclysm fan club.

One thought on “Cataclysm”