Character progression in Trove is varied, from class leveling to club world developing to mount, pet, and recipe collecting. Perhaps my favorite type of progression in the game involves movement. It’s an odd concept, but I think it’s a suitable way to express one of the more novel aspects of Trove; how you maneuver through the world changes over time as a type of progression. However before I talk about movement progression in Trove, I’d like to give a little context as to why I think this is such an important feature that is quite relevant to the recent “discussion” between WoW developers and disgruntled players with regard to flying in Draenor.

This week a couple of blog posts caught my attention, one directly addressing the topic of flying and the other more tangentially related. The first was published by Azuriel at In an Age and it convincingly argued that the world of Draenor is in reality one big developer-directed dungeon. The restrictions on flying, the artificially created corridors that restrict movement through the zone, and the linear quest chains drive players in a very specific direction predetermined by the development team. The other article that got me thinking was written by Shintar at SWTOR Commando on the funneling of alts through the same content post 50. Shintar points out that after the conclusion of the class stories, the same story is played through over and over by every alt, leading to a narrow content experience. What both posts are ultimately discussing is the “on rails” aspect of both games so common to theme park MMOs. It’s not a new criticism, but it’s one partially resolved by the progression of movement found in Trove. 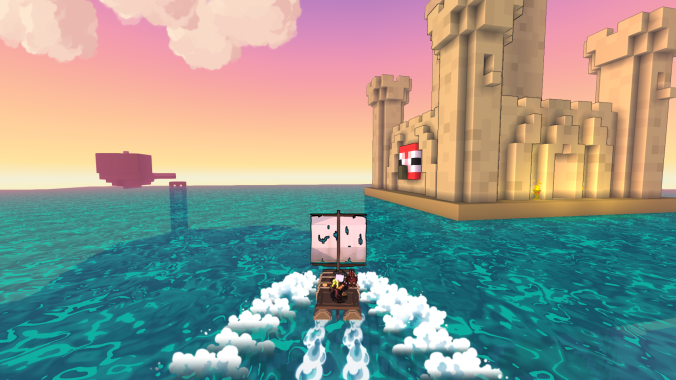 Did I mention there are boats as well?

If you’ve been playing MMOs for a while, you’re probably familiar with the claustrophobia these narrow experiences evoke.  Recently in Star Wars: The Old Republic I was on Ilum going into several mineshafts to save the world. Literally. The planet was going to crack if I didn’t turn off these mining machines which sounds really exciting except in reality I went through the same map twice and encountered the same mob clusters twice. It got boring pretty quickly but there was no alternative for advancing the story; I had to press on and endure the grind. Imagine doing that on 15 other advanced classes, a situation that is very real for SWTOR veterans due to the 12x XP. Even a more open world environment like World of Warcraft can feel just as closed when questing determines your movements in much the same way. I think this might be one reason players enjoyed flying in WoW. It wasn’t just about efficiency, it was also about approaching familiar situations in a new way. At the very least it allowed you to reduce the time it took to play through those repetitive, “on rails” situations.

Compare my SWTOR experience to the way I move through the environment in Trove. As a new player I started out with a double jump and a slow mount. When I would approach a dungeon I would search for the entrance, follow the path created by the developers from beginning to end, and then hopefully defeat the final boss. Because all I had was a double jump, it took time working through the platforming required to maneuver through the dungeons and reach the end boss. However as I played through the content more and more, my movement options started to expand. First I found gear with “Jump” as a stat. This increased the number of times I could jump before having to touch ground. As of this writing, my current gear has +23 Jump. That’s right, I can jump twenty-three times before I have to land. The additional jumps allow me to avoid certain platforming perils or even to find alternative ways to enter a dungeon.

As I continued to progress through the game I realized I could use craftable bombs to further change the way I moved through my environment. Rather than searching for the front door, I began blasting my way through walls, roofs, and floors. When my mastery rank reached 20 I received my first pair of wings—which function like a glider— opening up even more options. You might argue that I’m “skipping content” by playing this way, but I’m not. I’m creating content, and I think that was the developer’s intention. The same dungeons appear in Trove repeatedly as you level. If you’re in Candoria, you’re going to see the same cake tower, gingerbread house, upside down ice cream cone, and gumball machine a lot. However as your movement options progress, you get to experience them in new ways. At first you’ll battle through them the “correct” way. As you gain more jumps, craft bombs, and earn wings, you’ll find all sorts of ways to engage the same experience.

Here’s how it might look once you have all these advancements: you’ll use your extra jumps to scale the outside of a gumball machine, avoiding the flame throwers inside. Then, you’ll blast your way through the glass and directly engage the boss. Once the cupcake or licorice man is dead, you’ll toss another bomb at the ceiling and jump up to the roof of the dungeon. Finally, you’ll leap off the top and glide your way to the layer cake tower next door, tossing a bomb at the side and using your extra jumps to clamber into the random entryway you’ve just created. It’s always a little different and vastly extends the life of the dungeons. 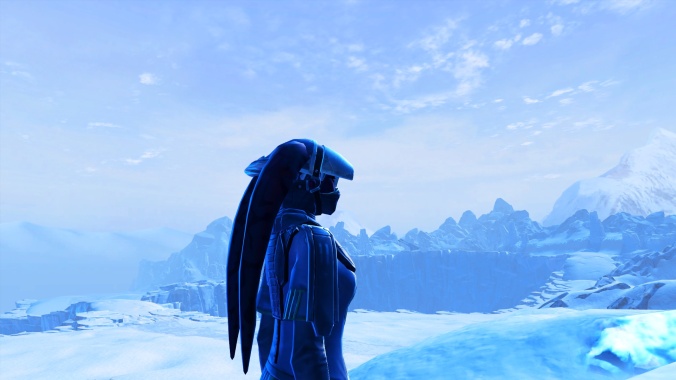 SWTOR, for all it’s beautiful landscapes would be so much better with open worlds to explore and exciting ways to traverse them.

Now imagine my experience in SWTOR but with similar options for movement progression. Perhaps I would have pushed through the first mineshaft the traditional way, burning through mobs to reach the end of the tunnel in order to defeat the elite at the end. Then with the next shaft, I might use a pair of rocket boots to jump over the entrance and onto the top of the cave, riding my mount until I reached the point where I thought the back of the cave was located. I would then pull out a timed explosive, set it, and blast a new front door through the roof. Leaping down through the hole in the ceiling I land… right in the middle of three mob clusters. Crap. I’ve misjudged where the boss was located, and now I have to either engage three groups at once or use some other movement option to escape the deadly situation. That sounds a lot more exciting than playing through the same narrow map in the same narrow way, doesn’t it?

I’ve used SWTOR as an example due to my own recent experiences, but the same ideas could be applied to World of Warcraft. Blizzard’s assumption that corralling players through a predetermined pathway will improve their enjoyment of the content is short-sighted; it works once, then it’s a grind. Instead, with future expansions they should follow Trove’s example and push alternative ways of exploring and moving through the environment even further. For now, just add flight back into the game, preferably without a petty grind.  Flight isn’t something that has to hinder the player’s experience of the content, it’s a way to expand the life cycle of what the developers have created. And with the skimpy gameplay offerings of Draenor, Blizzard needs all the artificial longevity it can get. That’s what Trove has done, and that’s why I see movement as an integral part of character progression in the game. If you’re playing Trove, keep that in mind as you level up your character and expand the way you move around the world. It’s not just a matter of convenience, it’s there for new means of exploring the world and maneuvering through lairs and dungeons. 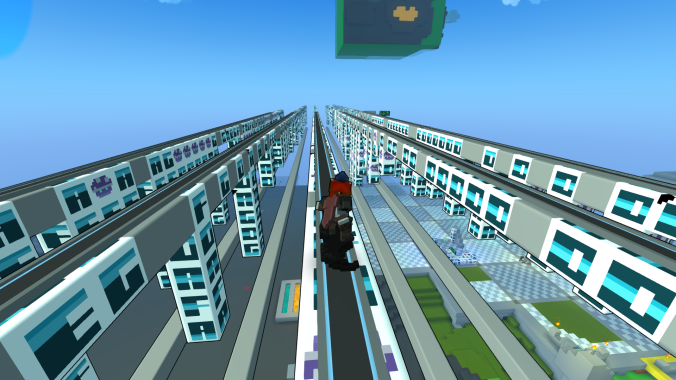 Also mag rails. I believe I forgot to mention those as well. This one plays music, and yes, I’m riding a moustache.